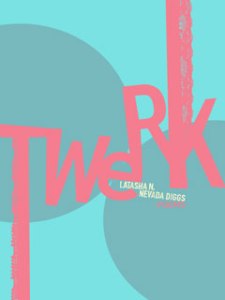 I don’t often judge books by their covers, but I do let the titles heavily influence me. I didn’t think twice about purchasing LaTasha N. Nevada Diggs’ TwERK based on the title alone. I expected it to be the sort of poetry collection that would jostle me out of the MFA haze of academy-appropriate poetry. I graduated a year ago and immediately went on a writing/reading hiatus for the next 8 or so months. Now coming back into the swing of poetry, I craved something that would pull me by both hands into something fresh, bold, and unknown. TwERK did exactly that.

The first thing I noticed about TwERk, just flipping through before actually reading any of it, is the many languages Diggs uses throughout the book, in single poems, and even in individual lines. “Mungkin (mencintai) mungkin” (meaning “possibly (to love) maybe”) is written in Japanese, Malay, English, and Spanish:

Although she does do side-by-side translations like above, it’s more typical of Diggs to imbed English words into lines of foreign language, encouraging us to read slowly/carefully, and to read things we don’t understand or that make us uncomfortable (because we don’t understand). Take for instance the fourth song in “March of the Stylized Natives: the lost verses of kantan pescado,” which is written in Chamorro and English:

If you let your eyes skim to the solely English side, you miss gems like “my nest is weak.” Each movement into or out of a language feels like a tiny jerk, but the whole dance of the poem is very playful, seductive, and fluid. It becomes hard not to completely give yourself over to Diggs as your sort of linguistic tour guide, to take a line like, “yute’ gadi ya’un falagu” and let it roll around on your tongue. Diggs is an avid explorer of language, experimenting with what all languages can do, which is essentially anything the body can do: twist, shake, jump, collapse, and (of course) twerk.

But TwERK is more than just an experiment with language; it’s also a study of how one culture can adopt/adapt style from another culture, for better or worse. In one of her monolingual poems, “bacche ka potRa,” (which is Hindi/Urdu for “nappy”) “the dandelion dance of Keisha’s mane” becomes “plumes burnt. / crunchy bacon. / her puberty looms early. fizzled particles / stuck on a flat iron. / [. . . ] wave / adieu corkscrew.”

In “April 18th” Diggs meditates on the name Tom Cruise and Katie Holmes chose for their daughter, perhaps considerably longer than they themselves did. Suri Cruise’s “birthright a name renamed & claimed by the famed deranged.” Suri, Diggs notes, is an ethnic tribe in Pakistan and Afghanistan; Suri is a flightless bird native to Patagonia; and it’s a type of alpaca with silky dreadlocks. In Hebrew, Suri means “princess.” In this poem, Diggs sings all the different Suris:

Suri, you rare breed of colors reading at a bookstore in Punjab.
Suri, planning Pashtun trilogies with regard to sightings of Rhea.
You mimic robust gummy grubs in the Amazon suckling lychee.

Suri, not to be found, but discovered in a rare & precious alpaca dreadlock,
who swallows & spits the gelato of Aphrodite.

And it’s difficult to not mention, given the title of the collection, the recent adoption (kidnapping?) of twerking by young, white females. A little over a year ago,  feminist blogger Sesali Bowen wrote an article for feministing.com on the commodification of poor and minority cultures:

It is super-easy to borrow from the experiences of others as a way to be “fun,” or stretch boundaries on what is “acceptable,” without any acknowledgement of context or framework…

I can’t stress enough that pop culture trends like twerking… are all rooted in someone’s lived experience.

Diggs’ collection calls into question how much we take superficially from other cultures for fun or trends, and what are we losing by not digging deeper. Diggs is an observer of appropriation but she’s also a participant. She draws inspiration and material from other cultures for her own artistic purposes. But the difference is that she keeps those cultural roots intact and forces the reader to face them, and we’re given a much richer experience because of it.

TwERK makes a bold impression, but its joys are surprisingly subtle – and with lines like “open your eyes baby shark / color your lips sour plum,” it’s not afraid that its sweetness will detract from its complexity. This made me think of the neon green, sweet-but-lingering Kyoto cocktail. In a nod to the book’s restless internationality, I’ve mixed in some elements of a Paloma, with tequila instead of gin as the base, and white grapefruit instead of lemon providing a slight citrus note.

Pour the ingredients in a shaker with ice. Twerk the shaker vigorously, then strain into a cocktail glass.

The combination of tequila and vermouth is a little unusual; you normally only see it in tequila martinis, which I always regarded as a bit silly. Feel free to omit the vermouth, but I think it makes the tequila a little less brash. Read responsibly.